Uncle John’s Truck: A Story of Coming to Manhood in Rural America (part 4) 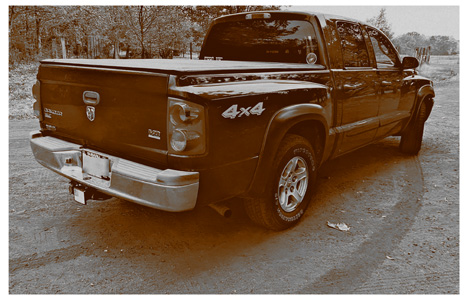 …On that same note that truck was maintained pristinely. Uncle john was a Dodge man. When I first met him he drove a Dodge Rampage and worked at a water bottling company. The fact that he was the type of guy who could keep a Dodge Rampage on the road for at least twenty years after all the rest of them were gone should tell you something.

Somehow, my Aunt Kathi told my dad that Uncle John hadn’t actually sold his old truck yet, and my jaw dropped when Uncle John called me and told me he would let me have his truck for the amount of the insurance settlement on my car. My dad and I wasted no time getting the title transferred,  and just like that; I found myself the proud owner of a well maintained Dodge truck that had been immaculately taken care of.

The acquisition of this truck opened a whole new world to me. Where before I had been somewhat limited in my hunting and fishing forays, ( an older model Ford Focus will not get you very far), the advent of Uncle John’s trucks was like having a passport to a whole new world. The first trip I took was out to the New Miami River to have an overnight camping and kayaking excursion. My dad and I had each bought a kayak a couple of years before and whenever we went kayaking together, we would stow them on a rack on the roof of his Subaru Impreza and we would go. However, we wouldn’t go very far because a Subaru Impreza won’t actually go much farther than a Ford Focus will.

My dad had gotten some fishing pole holders and had installed them in our kayaks by using a doorknob cutter on a cordless drill and some marine rivets. So that first night on the river I spent fishing from my kayak and catching crappie and smallmouth bass in the river inlets…