SURVIVAL WEAPONRY; 4 REASONS TO USE A SHEPHERD’S SLING FOR SURVIVAL 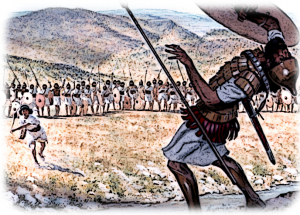 One of my favorite stories from the Bible is that of David and Goliath. It’s not so much that it is a story of great heritage and tradition, it is that of course, rather it is the concept of a man using what he had to get what he wants. It is, in fact, one of the ultimate stories of survival. And it warrants discussion, I think, because the weapon of choice for David was one of the most basic of all survival weapons, a simple stone sling. Now, a stone sling is not the most simple survival tool, that honor goes to the throwing stick, a solid bow of wood about the circumference and shape of your bent arm which you can hurl at enemies or prey with fairly amazing accuracy. But a sling is a very close second. A sling involves nothing more than two pieces of cordage, (rawhide or shoelaces will work), that holds a pouch for a stone in between them. (I have use the insides of pants pockets and shoe tongues before). The premise is to use centrifugal force to generate velocity and to direct the generated velocity at your target in an accurate manner, or, in layman’s terms: to get a good spin on it and give it a fling! These things are highly accurate and are used the world over to bring down some pretty hellacious foes. In survival, you will use what you have on hand. In any event, I have compiled four good reasons that a stone sling is a good choice for survival… enjoy!