PA sort of says “NO” to semi-autos… 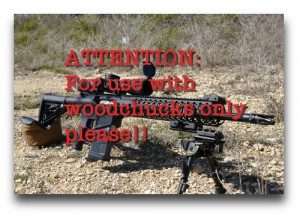 If you had been planning to schedule a big game hunt as a military surplus tent adventure this year in Pennsylvania using your AR platform rifle, you better make alternate plans or get thyself to the gun-store ASAP. Field and Stream magazine reports that in a last minute move from the PA commission on fish and wildlife, a vote was cast to allow the use of semi-automatic rifles for only small game and for furbearing animals. This contradicts the approval in January, by the commission, which allowed for hunting of both sets with semi-automatic rifles. According to Brian Hoover, the commission Board president, this decision resulted from the commission having “Listened to their hunters”. According to Hoover, a recent survey has revealed that 64% of Pennsylvania’s hunters opposed the use of semi-autos for big game hunting; however, the opposition to the use of semi-auto’s on furbearing animals was much lower. According to sources, Pennsylvania is the nations holdout in regards to allowing the use of semi-auto rifles for big-game hunting, with even Ohio finally acquiescing recently to allowing rifles for use in the pursuit of their only big game animal the Whitetail Deer. In Ohio, the only stipulation is that the rifle cartridge must not be fluted and above .30. Commissioners do say, however, that the prospect of semi-autos for big game use is not entirely off of the board, it is simply off of the board for the 2017-2018 hunting season. The fact is that a new law came into effect in November which gives the commission the right to approve the use of the semi-autos and in effect, the commission is being cautious in the application of that new ability. To all appearances they are trying to be inclusive of their clientele in regards to changing the hunting laws of their state. This is actually a welcome respite from the traditional bureaucratic practice of legislators making rules about things in which they are not directly involved, and is an excellent example of mis-representation being curtailed and stifled by the powers that be.