SAD NEWS IN HUNTING?: 2 THINGS TO CONSIDER ABOUT PEDALS BEING KILLED BY A NJ HUNTER 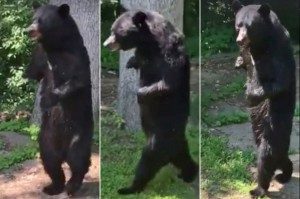 It is with a heavy heart and sad visage that I must report to you the demise of the nations most beloved black bear, Pedals. Pedals was a stalwart and comely bear who had learned to walk around on two feet like a human after having probably been injured by a car collision. He lived in New Jersey. Pedals has been the ire of many an over-enthusiastic would be Sasquatch hunter and has also sent lots of people fleeing into the underbrush screaming at the top of their lungs, while he simply ambled about looking hither and yon for any scraps which would be of interest to a bi-pedal bear. His demeanor was always one of mild disinterest and he somehow created an air of Narnian proportions as he strode about like an absent minded professor who had somehow mis-placed his car keys. It is reported that a bow and arrow shooting bartender from Somerset County is the one who dispatched young Pedals to wherever it is that bi-pedal bears go when they get their birthdays turned off. And the New York post further reports that this individual has been targeted with scads of offensive hate-mail, threats, and petitions for his revocation of hunting rights… he did, after all, kill a beloved New jersey icon. I would like to point out however, two things that should be considered before passing judgement on the poor guy from New jersey.