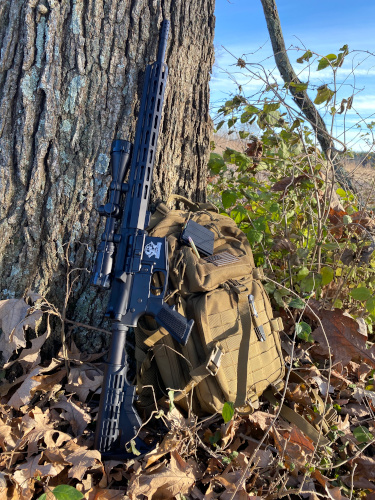 If you are a midwestern hunter in states like Ohio, Indiana, or Iowa, then you know the absolute frustration of trying to pursue big game in what is known as densely populated hunting grounds.

For years we have been restricted to hunting whitetail deer with either a shotgun or a smoky old muzzleloader. The reason for this has always been hunter, (and farmer), safety. In the flat lands where corn and wheat fields abound, there is a real concern with hi power rifles, which can shoot for sometimes up to a mile, missing their targets and hitting people or equipment.

Several years ago, the state of Ohio allowed for the use of handgun cartridges in the hunting of whitetail deer. Recently they have gone a step further and allowed for the use of handgun cartridges that fire from rifles. “Straight -Walled” cartridge rifles for deer hunting are now a common thing in Ohio. In response to this new market for deer hunters, Winchester Repeating Arms developed a fairly good product in the 350 Legend™ rifle cartridge.  This cartridge is basically a 5.56mm necked up to accommodate a .357 bullet. The result is a hard hitting, fairly low velocity round that won’t really go too far.

Many firearms companies are making these rifles to supply the market and they are using every platform to accommodate an individual shooter’s needs.

Henry™ rifle company for instance, is offering the 350 Legend in both a lever action rifle, which is their mainstay, and a single shot edition, which is high quality but also very affordable. Ruger™, Savage™, and Winchester™ all offer it in bolt action rifles, and many manufacturers are offering this cartridge on an AR platform. I personally bought one from the great Lakes Manufacturing Company out of Michigan and installed a Bushnell 3-9×44 Banner scope, and I am shooting 170gr. Hornady SP rounds after having sighted it in at 150 yards with a Winchester 145gr FMJ. According to the box, 0 at 150 yards will produce a 5.2″ drop at 200 yards and a decrease of 172 fps. I usually set up my AR to fire with my nose touching the charging handle as I was trained; however, you might want to back the scope up a bit because the recoil is more than you’ll likely be able to comfortably stand on the tip of your nose… at least that was my experience.

I’ll let you know how it goes in later installments.