The view from here: two things you must remember about multitasking 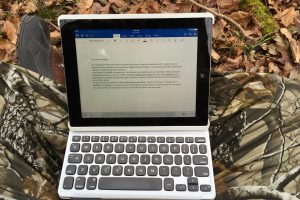 As I sit quietly in the woods with my camera set up on a tripod and equipped with a 500mm lens for maximum focus and range, (at least to my college student budget), I contemplate what life is about and I ponder on what brings true happiness.
I am waiting for wildlife to happen by. I don’t really care what they are or what they’re doing, (though I would prefer -if given my choice- to film a family of sasquatches digging for roots in the ditchline), but beyond that I am good with squirrels, deer, coyotes, or any form of bird that wants to present itself to me for film capture.
It’s quiet out here, and there is a very light snow gently falling… the first of the year. Though it isn’t significant it’s getting us to where we want to be and this is, speaking for myself at least, into the midst of a white Christmas. We haven’t had one in mid Ohio for about five years now, and we’re way past due.
It’s cold here, 29 degrees or so, and as I write my iPad is freezing up… literally I think.
The point I’m making here is that multi-tasking can take on relevance in any scenario, and I am right now fulfilling obligations to two different clients as well as getting data for research projects. Thanks to the advent of things such as iPads and wireless technology, I am sitting in the woods adjacent to the local college campus, gathering footage for a client on Ohio whitetail deer, filming B-roll for a media class assignment and writing blogs for another client. I am also out of the house and getting some fresh air. 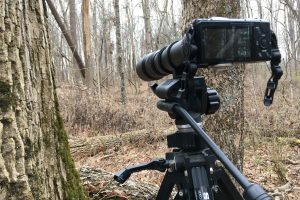 If I didn’t need to be quiet and at least somewhat attentive, I could be doing this from my iPhone either through thumb typing or by voice to text dictation.
Plus, I am also on a military surplus tent adventure with a friend of mine as well, so I’m killing several birds with a handful of stones I guess, but I digress. We’re camping for a few days in the local woods trying to get footage and just having a grand old time doing it. I’ll post some inconsequential footage with this article.
I want to urge you to think about the technology that you already posses and ask yourself how you can apply that technology in such a way that you can recreate while you work. You’ll be surprised, I think at what you’ll find, and all of a sudden work might not seem so much like work. Particularly when you are able to do it from the midst of something you actually enjoy doing.