THINK YOU COULD BE A HUNTER – GATHERER? THINK AGAIN 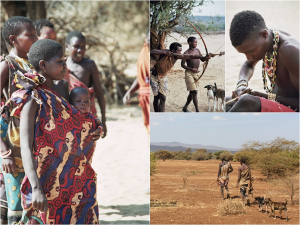 Consider if you will, the Hadza people of Tanzania. They are a true hunter-gatherer society who’s men leave their grass huts at the crack of dawn, poison tipped arrows in hand, and venture out into the wilds of Africa in search of their next meal. This meal could be anything from a small frog or bird, to a full or half grown giraffe. The women also venture forth to perform the other aspect of their existence, the gathering. They go in search of berries, roots, vines and tubers which add supplement to their otherwise protein rich diets. This is everyday life for this indigenous people, and it is the same lifestyle that your ancestors lived so many thousands of years ago. It is the same life that we practice, train, and prepare for as survivalists; however, a close look at these people reveals to us, if we are completely honest, a strong deficiency in our commitment to make a living like they do. In all fairness it must be said that the ability to eek out a living on the plains of Africa is not going to be the same as trying to live in the wheat belt of America or in the mountains and fruited plains. However, it becomes apparent that society and evolution have not necessarily been good to us as far as keeping our survival skills keen goes. A recent study from Yale researchers has shown that these people exercise vigorously nearly two and a half times as much as the modern athletic American or European. As a result the studies further show that these people are extremely low risk for ailments such as heart disease, high blood pressure, arthritis, high cholesterol, and diabetes. They furthermore don’t seem to slow down as much or are effected as much by age as are their Caucasian counterparts. Nor do they suffer from dementia. Do you want to be a real survivalist? Take heed of these people then and see what it will really take in a post-apocalyptic society to stay ahead of the game… no pun intended.