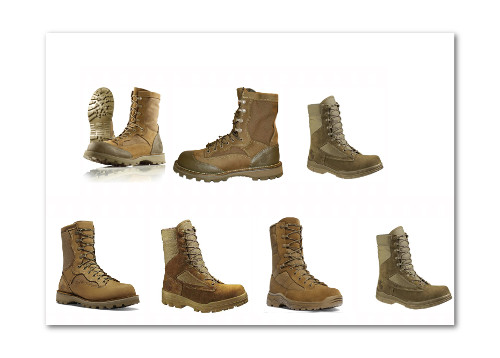 Do you remember the good old days when you were issued one pair of uniform boots of the same exact style as everyone else in your branch of the service? Well, those days are over, at least as far as it goes for the United States Marine Corps. In a recent article written for Military.com, the Marine Corps has, in an effort to continually improve the equipment and clothing of the branch, approved 7 new brands of combat service boots. “”

According to the article, “Marines can now choose from 16 different combat, rugged all-terrain or optional boots. The list of approved styles was released in a service-wide administrative message last week, which was signed by Lt. Gen. David Berger, the head of Marine Corps Combat Development Command.”.

The article, written by journalist Gina Hawkins goes on to give a brief description of the merits of the new approved footwear, as well as a detailed listing of them and their manufacturer.
“These are the boots that were added to the list of officially approved footwear:

The last time the list of authorized boots had been formally updated was in March 2016″.
What this means for the civilian military surplus community is that these same boots will at some point in time be made available as surplus. Because, even though the individual soldier will often purchase the footwear of his or her choice directly from the manufacturer, the military will still buy mass quanities of same for research, testing, deployment, etc…