Uncle John’s Truck: A Story of Coming to Manhood in Rural America (part 2) 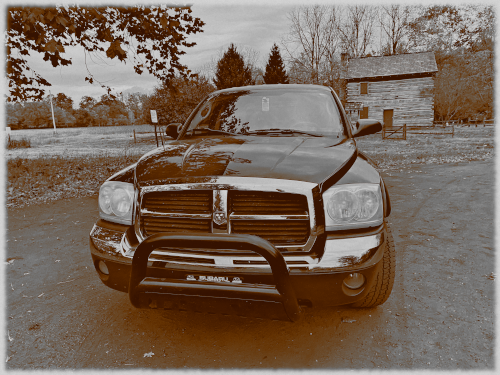 … The car that stopped in front of me was pretty straightforward. The lady driving the heavy Ford Expedition pulled up to the stoplight and ceased all motion as planned, I followed suit, and the guy in the F350 dually – which was directly behind me – blew it!

The crunch was horrendous as everything moved in slow motion around me. I remember thinking back to every modern action movie I had ever seen, with “The Matrix” taking a predominate spot in my rumination. As the shattered glass, bits of plastic, and personal items that had been sitting in the seat beside me began to dance in strange rhythm around my head, and the ass end of that Expedition loomed menacingly in my windshield preluded by the crumpled metal that had just milliseconds before been the hood of my car, it occurred to me that I could be injured and I experienced a strange calm and quieting.

Suddenly everything sprang into motion and I could hear a horrible cacophony of sound. There were car alarms sounding, the tinkle of glass, loud honking, and the memory of that never ending thud of being battered from both ends by vehicles far larger than mine.

My first thought was for the injured. By this point in my training I had adopted the mindset of a first responder, and grabbing my medical kit from the floorboard where it had landed, I pulled the door handle on my car and threw my body weight into the door. It squeaked open grudgingly, and in a moment I was free. In my periphery, I could discern that the Expedition was driven by a young woman, mid-twenties to early thirties. The truck I had seen was driven by an older man. I had noticed this somehow as I glanced in the rearview mirror after stopping at the light, and saw that he had a dogged, determined look on his face as he barreled into the back of my car; I don’t think he even saw me or the Expedition for that matter…