SURVIVAL CANNING; 4 THINGS YOU DIDN’T EVEN KNOW YOU COULD CAN 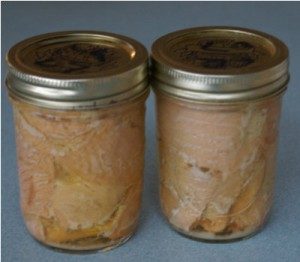 Recently I was working a long shift with my good friend Tom L. when I suddenly detected the odor of sweaty socks and fishy garbage wafting through the office at about chest level. Since I was sitting down I got the maximum effect out of this phenomena and immediately jumped to the most likely conclusion. “Tom!” I yelled, “What the hell are you eating?” He appeared quickly from around the corner, eyes gleaming with devilish lust, a small canning jar hanging limply from one hand. In his other hand he brandished the fork side of the hobo knife I had given him for Christmas, the year before. He gestured towards me with the jar and the knife at the same time. “It’s fish sarge, canned salmon from last year’s run in New York. Me and Jerry got twenty-seven pounds of this stuff apiece. I been canning it.” It smelled like hell, but I had to admit that he had my interest. I am a sucker for canned things. I love sardines, clams, oysters… all of it. Even canned crab meat. So it was with very little trepidation that I took a bit of old Tom’s canned salmon and ate it… It was like a party in my mouth! I decided then and there to accompany Tom and Jerry, (yes, I know!), on their next fishing trip for no other reason than to stock up on a supply of fish for myself. Tom is going to can it for me too. Here are things that Tom cans that would make an excellent addition to any military surplus tent adventure, survival trip, or existence after a coming apocalypse.