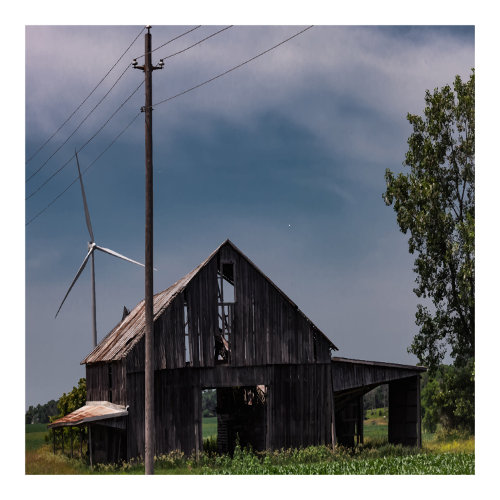 On a recent trip through Indiana I happened to come across a field of high density turbines which are used to harness wind for a renewable energy source in the form of windmill farming.

One scene in particular struck me as epic and I had to stop and snap a picture. In the background of the photograph one sees a high density turbine, in the forefront there are power lines. In between is a decrepit old barn with the advertisement for “Mail Pouch” still barely visible on it, the testimony of days gone by. Back in the middle of the century there were no billboards you see, and companies would advertise their products by paying to paint their logos on barns by the side of the road. I interpreted this scene as “The old and the new” while in between, the rotting wooden hulk represents their effect on the nation’s culture.

The fact of the matter is that our culture is influenced now by the need for sustainable energy. Gone are the days of the high horsepower engines and the seemingly endless pools of fossil fuels. Today we need to focus on the possibility that the population is going to increase while the resources decrease. Luckily the U.S. Military is working on several different methods of doing just that. Here are 2: