SPRING BEAR HUNTS; 5 OF THE BEST SPOTS FOR BEAR 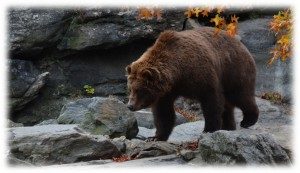 I have told you before about my favorite bear hunt plan that was going to be a combination military surplus tent adventure and hunting trip. In this endeavor, myself and The Wildman had planned on taking a black bear with a couple of spears in the Great Smoky Mountains, since we both fancied ourselves to be great hunters and survivalists. That was, until we actually arrived and found out two very key factors: 1. The black bears at the Great Smoky Mountains are protected, and 2. They are just little bitty things that are nearly as tame as dogs. After having fed several of them bologna and cheese sandwiches, and hearing one of them literally cry like a baby when The Wildman cuffed it on the nose for getting a bit “nippy”, we both elected to amuse ourselves with taking pictures and we left the hand forged spears in the truck. However, the North American Grizzly bear is another critter entirely, and if you are actually in the mood for a spring bear hunt, let me give you five recommendations, (according to LiveOutdoors), for an excellent bear hunt this year, where you will be more than happy in pitching your military surplus Army tent and making a week out of hunting this big, magnificent creature.