Should Chesty Puller get the MOH? 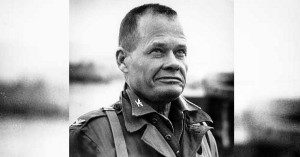 Lewis Burwell Puller, Chesty, as he is known, is an infamous Lt. General who has become the epitome of United States Marines. He was noted for his heroics and mental aptitude throughout his life and is seen even today as a hero to all members of the Marine Corps. According to the Marine Times, over 300 marines have had the distinction of having been awarded the Congressional Medal of Honor, one of the highest military honors that can be bestowed upon any service member. The award was began in 1861 and unfortunately, Chesty’s name has been omitted from the list of recipients. Chesty saw a lot of combat in his time, and his iconic frown and battlefield witticisms are legendary. For instance, he was once quoted as saying “They can’t escape us now” when he as told that he and his men were surrounded on all sides in Korea. Chesty earned five Navy crosses during his career, which is the second greatest military honor for valor. And there have been attempts made in the past to upgrade some of his medals to MOH, however, for some reason they have all failed. It is the opinion of many that the time has come to posthumously upgrade this war hero’s accolades to the greatest degree. Marines still learn of him and chant his name in boot camp. There is no greater aspiration than to be like Chesty Puller, much like Army soldiers still learn of Audie Murphy. A recent review by the Pentagon has revealed that there are hundreds of recent war veterans who have not been properly awarded for valor on the battlefield and the former secretary of the Navy, Ray Mabus, has recommended that some Navy Cross recipients have their awards elevated. Though the review is limited at this time to post 9/11 recipients, it is perhaps high time that this American hero is recognized as well.