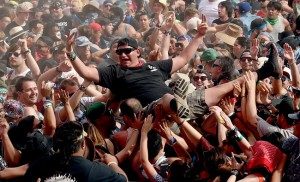 According to UPROXX, the organizers of Coachella and Bonnaroo are preparing to bring a new music festival to Denver Colorado this year which is a great opportunity to expand our horizons and have yet another opportunity for a military surplus tent adventure. Though this one may be a bit too wild to be considered a “fun for the whole family” style of adventure, it is definitely an opportunity to get out into the mountains, pitch a military surplus tent, and “Howl at the Moon’ in a very real way. Though this is a project which is still in the works, the organizers of these events are planning to create a super-fest of dynamic proportions. According to AEG’s David Ehrlich, this plan has been in the making for about six years and has nearly come to fruition. Of course, he said, it is going to be up to the residents and the local interests to have the final determination on the inclusion of a new festival, but in reality, who wouldn’t want a fresh influx of tourism to a community that makes it’s living on tourism anyway? This new festival will be started on the grounds of Denver’s Overland Park golf course, and the report is that this festival idea has already been brought up to residents at a community hearing in the courses clubhouse on January 30, 2017. The makers of things, in this instance, have given their blessing however to a new music festival, and a new music festival they shall have. It has already been determined that there are definitely other places which will be open to a new music festival in the event that this one is rejected. So better start budgeting now, and make sure that you have taken the necessary measures to prepare your military surplus tent for yet another rock and rolling, beer slurping, late night, music adventure.