CAMPING 2017: 3 REASONS TO TAKE A FOLDING TABLE WITH YOU 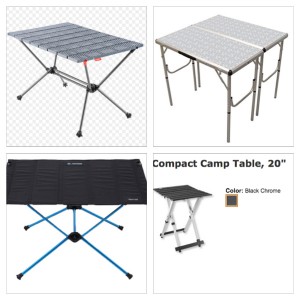 If you are like me then you have already gotten a jump on the camping season this year and have gotten out into the Spring mix to get a taste of the crisp cool air and the gentle sunshine without the benefit of the noseeums and mosquitos. The fact of the matter is, at least for me, that it’s the little things that make a camping trip miserable or great. One of the things that I despise most in life is being hunched over something for any length of time. The worst for me is when filleting a thousand or so panfish; but a close second is trying to use some old log or a flat rock as a work space when I am camping and preparing game or fixing a meal. And as a matter of fact it was during a recent fling into the wilderness while I was trying to prepare venison kabobs, corn on the cob, and an apple strudel for the wife and the kids that inspiration struck. (This inspiration did not strike me in the usual way, it struck me right across the top of my head… the bald spot, where the errant, early season fly had landed, which my wife had promptly smacked with a rolled up magazine). It turns out the magazine was an old copy of Popular Mechanics™, and there was an article about fold up tables in it. (YOU CAN READ IT HERE IF YOU LIKE! 🙂 ) Here are three really good reasons to take a folding table camping with you: