A Kind Word For the Ruger Mini-14 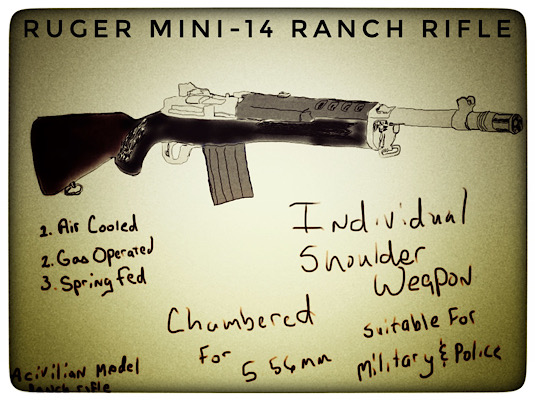 In a world that has somehow fallen in love with the AR platform of rifle, for everything from varmint shooting to deer hunting, many people forget that there were other platforms prior to VietNam and the M16.

According to several knowledgeable individuals, the absolute best platform for survival and combat was the M1 Garand, a .30-06 rifle that helped America settle the mess that Hitler and Hirohito started in WWII.  This rifle was great for distance as well as for CQB, (in a pinch). A friend of mine named Dale “Piper” Hickman was in the 5th wave at Omaha Beach on D-Day, and walked across Europe in the 1940’s a privileged guest of his Uncle Sam. Once, while pinned down in a French village by a German sniper, he successfully used his Army issued M1A1 Garand to  counter snipe the unlucky bastard after he observed his muzzleflash in the top of a church steeple. Piper claimed he got three rounds off as he ducked behind the corner of the building he was using for cover, and then flanked the church from an adjoining street and cleared the church with two other members of his platoon. There he found the sniper, deceased from one round that punched a hole in his throat, one in the center of his Nazi face, and one adorning his forehead like a ruby red jewel. Piper was very impressed with the rifle’s performance stating that was the only time during his entire tour that he was able to judge his own accuracy, because no one else had shot at the guy.

However, most soldiers found the M1A1 Garand to be too heavy, it’s ammo too cumbersome, and it’s length too much to try to maneuver. Therefore, the next rifle that went into service was the .308 M-14 rifle, which never saw a lot of combat use other than in the very early years of the VietNam war. There it was discovered that the ergonomics of the rifle were off for jungle combat, and the M16A1 was introduced into service.

However, many people saw the benefit of the M-14 design for sporting and utility purposes, specifically for ranchers. That is why, as the M-14 rifle lost it’s place to the M16 platform, companies like Sturm Ruger saw and opportunity in the design. Ruger therefore took the basic design and repaired the ergonomic flaws and produced the current Mini 14 rifle. This rifle had a very distinct cult following before the attention turned toward the AR platform which evolved from the M16. It was very popular in law enforcement and quasi military organizations like Border Patrol, Correctional Facilities and Fish and Wildlife. Sturm Ruger Co. offers excellent customer service for these rifles, and even offers armorer courses around the world to teach dis-assembly, modification, and upkeep.